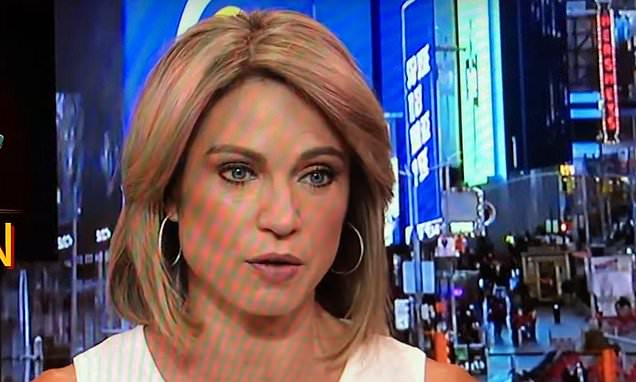 Amy Robach’s breasts can be described as well shaped. Are they real or is it breast implants? Find out down below!

Amy was born on February 6, 1973 in St. Joseph, Michigan. She holds a college degree in Broadcast Journalism from the University of Georgia. Young Robach also competed on Miss Georgia in 1994 and ended on a great 5th place. She used to work as a national correspondent for NBC but switched to ABC in 2012. She was married to Tim Macintosh until 2008. She now lives with her second husband Andrew Shue. Robach was diagnosed with breast cancer in 2013. Her treatment was complicated because cancer has spread but she is healed now.

After two rounds of chemo, I’ve started to notice, slowly, but surely, my hair has started to appear more regularly in my shower drain, sink drain, pillowcase and comb.

My husband, Andrew Shue, is the co-founder of Do Something, and we both speak and present at awards ceremonies. It’s absolutely amazing and humbling to see all the work so many young people are contributing to better their communities on both a local and global front.

Having cancer is one thing; looking like you have cancer is another thing. It’s a disease that already takes so much.

You don’t have to live on a farm to have chickens; in some places, you just need a little bit of green space and a tidy chicken coop. To me, they’re nearly ideal pets. They feed us more often than we feed them! We have 2 chickens, Goldie and Paprika, and they each produce 1 egg a day, sometimes more.