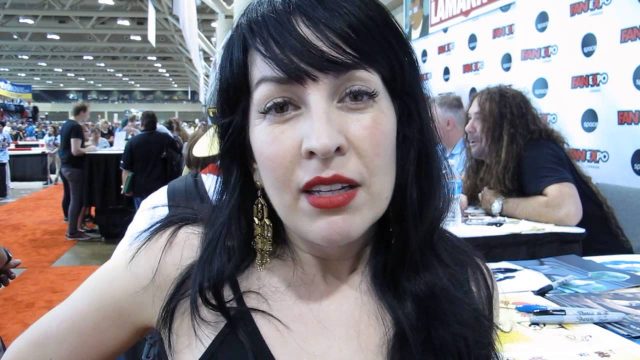 Grey DeLisle’s breasts can be described as petite. Are they real or is it breast implants? Find out down below!

Grey DeLisle is an American voice actress and singer-songwriter who has done voice work for numerous animated films, television shows, and video games. Many of her major voice roles include “Vicky” in the Nickelodeon TV series, “Fairly OddParents”, as well as the equally evil “Mandy” in the Cartoon Network TV show, “The Grim Adventures of Billy and Mandy”. She is also famous for voicing Daphne Blake in the Scooby-Doo series. In video games, she voices Amanda Valenciano Libre from Metal Gear Solid: Peace Walker. Grey released her debut album The Small Time in 2000. Born Erin Grey Van Oosbree on August 24, 1973 in Fort Ord, California, USA, to parents Joanna Ruth and George Van Oosbree, she was raised by her grandmother through her difficult childhood because her mother was a drug addict. She belongs to Dutch, Irish and Mexican descent. She attended and graduated in 1991 from Chula Vista High School. She has been married to Jared Griffin since June 27, 2012. She was previously married to Murry Hammond from 2002 to 2010 and Christopher DeLisle from 1992 to 1993. She has three children.

I feel like my music is just an extension of my acting. I treat the songs like scenes that tell a story… it’s very similar. My favorite thing is when cartoon fans show up to my live gigs! They are always the most kick-butt audience members ’cause they’re not trying to act all cool like a lot of the music fans do! It’s refreshing!!

My favorite thing is when cartoon fans show up to my live gigs! They are always the most kick-butt audience members ’cause they’re not trying to act all cool like a lot of the music fans do!

Somehow, it seems that the sadder a song is, the happier I feel. The release of emotions that many would label as ‘negative’ is actually a liberating process for me.

I hardly ever watch my own work. I just end up picking myself apart! I can’t even stand to hear myself on voicemail. the sound of my own voice is like nails on a chalkboard. The same goes for my records.

I was always talking in weird voices from the time I was two. I guess I just found a way to keep doing it! I did get a degree in theater and took some voice-over classes… but most of it is just the same stuff I was doing as a kid!