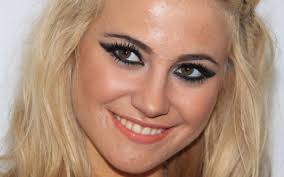 Pixie Lott’s breasts can be described as bigger than average. Are they real or is it breast implants? Find out down below!

Short Bio
Pixie was born 12 January 1991 in Bromley, UK as a Victoria Louise Lott. Pixie is her nickname since she was so small as a baby. She was awarded a scholarship at Italia Conti Academy of Theatre Arts. In 2014, she was a contestant on reality TV show Strictly Come Dancing. Pixie Lott posed for numerous fashion magazines, such as Company, InStyle, Cosmopolitan and Fabulous and even agreed to pose for men’s magazine FHM, proudly showing her curves in blue bra.

I’m a really bad liar. My mom finds out every time, especially now that she’s got Facebook.

I love to have Heinz Salad Cream on all my food!

I don’t think I’d get caught up in the crazy side of the music industry because it’s just not in my nature.

I like to wear girlie things, but only if I can rock them up with biker boots or a jacket.